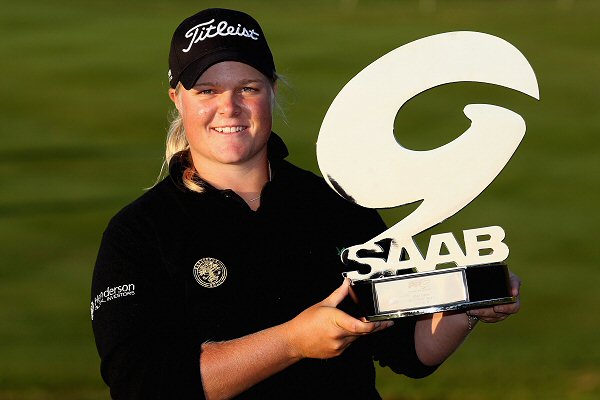 The 22-year Swede scored 32 Stableford points, 18 of which came on the final three holes, in a new shortened version of the game played over nine holes.

Ian Poulter (27) was the leading male, a point ahead of Victor Dubuisson.

Home favourite Ian Woosnam finished a further two points behind as he enjoyed his first taste of the 2010 course at Celtic Manor, near Newport.

Nine-time major winner Gary Player, now 75, rolled back the years to finish with 18 points, but it was a disappointing return to Wales for Graeme McDowell.

The current US Open champion – who will be defending his Wales Open title this week – failed to emulate the heroics which secured Ryder Cup victory for Europe last October as he finished joint-bottom on 15 points with fomer Open and US PGA champion John Daly.Hedwall’s victory came a day after she celebrated her maiden win on the Ladies European Tour at the Allianz Ladies Slovak Open.

Playing alongside Poulter and Alfredsson, Hedwall birdied the final three holes – all of which had been designated PowerPlay holes and so yielded double points – to pip her more illustrious compatriot.

Alfredsson was the clubhouse leader when she rolled in a birdie to move two points above Creamer, but her lead lasted barely a minute as Hedwall also birdied the last, finishing her round at five under par.

“I was nervous and struggled in the beginning, but my putting saved me a lot today,” she said. “I really can’t believe the last 24 hours.”

Designed to emulate the speed and success of Twenty20 cricket, PowerPlay Golf is played over nine holes instead of the customary 18 for championship golf, using the Stableford points system.

Two flags are placed on all greens – a white flag and a black flag, which is tucked away in a harder position.

The players must nominate three of the first eight holes on which to aim for the black flag – known as PowerPlay holes – with the possibility of extra points on offer for birdie or better.